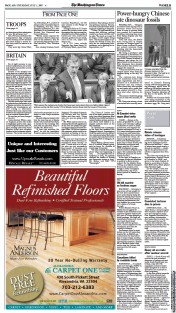 BEIJING (AP) — Villagers in central China dug up a ton of dinosaur bones and boiled them in soup or ground them into powder for traditional medicine, believing they were from flying dragons and had healing powers.

Until last year, the fossils were being sold in Henan province as “dragon bones” at about 2 yuan, or about 25 cents, per pound, scientist Dong Zhiming told the Associated Press yesterday.

Mr. Dong, a professor with the Institute of Vertebrate Paleontology and Paleoanthropology of the Chinese Academy of Sciences, said when the villagers found out the bones were from dinosaurs they donated 440 pounds to him and his colleagues for research.

“They had believed that the ‘dragon bones’ were from the dragons flying in the sky,” he said.

The calcium- rich bones were sometimes boiled with other ingredients and fed to children as a treatment for dizziness and leg cramps. Other times they were ground up and made into a paste that was applied directly to fractures and other injuries, he said.

The practice had been going on for at least two decades, he said.

Mr. Dong was among a team of scientists who recently excavated in Henan’s Ruyang County a 60-foot-long plant-eating dinosaur, which lived 85 million to 100 million years ago. Local officials held a press conference Tuesday, showing off the find to the public for the first time.

Another two dinosaur fossils were being excavated in the area, which is rich in fossilized dinosaur eggs, Mr. Dong said.

* Headline from The Guardian (UK).