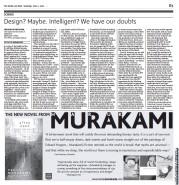 Design? Maybe. Intelligent? We have our doubts
Reviewed by Michael Ruse
The Globe and Mail Weekend, (Canada), page D5
02 Jun 2007

In 1961, at the height of the Cold War, biblical scholar John Whitcomb and hydraulic engineer Henry Morris published a book, Genesis Flood, arguing for a “young Earth” history of the origins of the world. According to the best of modern science, they claimed, everything happened exactly as described in the early chapters of Genesis – six literal days of creation, humans last, worldwide deluge.

I had expected to be as irritated by Michael Behe’s second book as by his first. I had not expected to feel sorry for him. The first — “Darwin’s Black Box” (1996), which purported to make the scientific case for “intelligent design” — was enlivened by a spark of conviction, however misguided. The second is the book of a man who has given up. Trapped along a false path of his own rather unintelligent design, Behe has left himself no escape. Poster boy of creationists everywhere, he has cut himself adrift from the world of real science. And real science, in the shape of his own department of biological sciences at Lehigh University, has publicly disowned him, via a remarkable disclaimer on its Web site: “While we respect Prof. Behe’s right to express his views, they are his alone and are in no way endorsed by the department. It is our collective position that intelligent design has no basis in science, has not been tested experimentally and should not be regarded as scientific.” As the Chicago geneticist Jerry Coyne wrote recently, in a devastating review of Behe’s work in The New Republic, it would be hard to find a precedent.

Sean B. Carroll’s review of Behe’s book, Evolution: God as Genetic Engineer appeared in the June 8 issue of Science:

“The Lord hath delivered him into mine hands.”

Those are the words that Thomas Huxley, Darwin’s confidant and staunchest ally, purportedly murmured to a colleague as he rose to turn Bishop Samuel Wilberforce’s own words to his advantage and rebut the bishop’s critique of Darwin’s theory at their legendary 1860 Oxford debate. They are also the first words that popped into my head as I read Michael J. Behe’s The Edge of Evolution: The Search for the Limits of Darwinism. In it, Behe makes a new set of explicit claims about the limits of Darwinian evolution, claims that are so poorly conceived and readily dispatched that he has unwittingly done his critics a great favor in stating them.

You can read Jerry Coyne’s review, The Great Mutator, from The New Republic at Powell Books. While critical of the book, Coyne says:

The general reader, at whom The Edge of Evolution is aimed, is unlikely to find the scientific holes in its arguments. Behe writes clearly and engagingly, and someone lacking formal training in biochemistry and evolutionary biology may be easily snowed by his rhetoric. The snow falls most heavily when Behe writes about the complex biochemical adaptations of animals, such as the structure and the operation of cilia. Cilia are small, hairlike structures whose rhythmic beating propels microorganisms; they also help move things along in other species (cilia line the fallopian tubes of mammals, for example, where they sweep the egg into the uterus). Each cilium is built from more than two hundred different proteins, including those making up its structure and “motor proteins” that make it move. Moreover, when a cilium is damaged or a new one is built, an equally complex system of intraflagellar transport uses sixteen other proteins to bring new material from out of the cell for repair, rather like a molecular assembly line.

This description is entertaining and instructive, and those unacquainted with molecular biology will be wowed by the elegance of this adaptation. Indeed, such complex features were what lured many of us into biology, hoping to explain their evolution. But the purpose of Behe’s exercise, beyond pedagogy, is simply to overwhelm the reader with nature’s complexity, hoping to raise the question of how mutation and natural selection could possibly have built such a feature — as if being wowed were the same as being persuaded. As Behe says, “The point is to see how elegant and interdependent the coherent system is — to see how different it is from the broken genes and desperate measures that random mutation routinely involves.” (“Broken genes and desperate measures” refers to the simple adaptations of the malaria parasite and its human opponent.) Surely, says Behe, a better theory is that cilia were created by the Intelligent Designer. 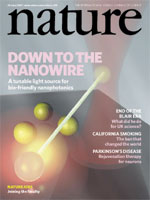 Textbook author Ken Miller takes a turn in the prestigious Nature with a review titled: Falling over the edge:

Michael Behe’s new book, The Edge of Evolution, is an attempt to give the intelligent-design movement a bit of badly needed scientific support. After a spectacular setback in the 2005 Dover, Pennsylvania, intelligent-design trial, and the 2006 electoral losses in Ohio and Kansas, the movement could use some help — and Behe is eager to provide it.

Knowing how easy it is to demonstrate the workings of evolution in the development of drug resistance in viruses, bacteria and protozoan parasites, Behe concedes the point that evolution works very well at this level. His case study, repeated almost to the point of tedium, is malaria. Resistance to drugs such as chloroquine has indeed arisen within the parasite population, and so has genetic resistance to the parasite in humans. But if the inter-species genetic warfare between Homo sapiens and Plasmodium is actually a prime example of evolution, how can it then be used to make the case for ‘design’?