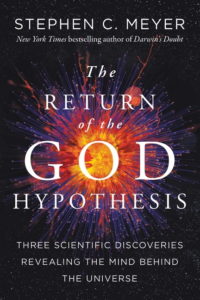 The Return of the God Hypothesis by Stephen C. Meyers

The Return of the God Hypothesis: Three Scientific Discoveries Revealing the Mind Behind the Universe by Stephen C. Meyer
Publication date: March 30, 2021

Summary:
n 2004, Stephen C. Meyer, one of the preeminent scientists studying the origins of life, ignited a firestorm of media and scientific controversy when a biology journal at the Smithsonian Institution published his peer-reviewed article advancing the theory of Intelligent Design. Then, in his two bestselling books, Signature in the Cell and Darwin’s Doubt, he helped unravel a mystery that Charles Darwin did not address: how did life begin? and offered further scientific proof to bolster his arguments on the history of life and our origins, concluding that life was designed.

In those previous books, Meyer purposely refrained from attempting to answer questions about “who” might have designed life. Now, in The Return of the God Hypothesis, he brings his ideas full circle, providing a reasoned and evidence-based answer to the ultimate mystery of the universe, drawn from recent scientific discoveries in physics, cosmology, and biology.

Meyer uses three scientific points to refute popular arguments put forward by the “New Atheists” against the existence of God: