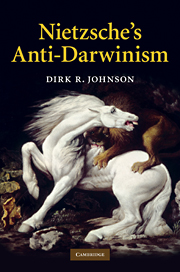 Cambridge University Press has recently published a new book on Nietzsche’s views about Darwin and Darwinism. What’s interesting is that the author, Dirk R. Johnson, takes the approach that Nietzsche was NOT a Darwinist. Both creationist and evolutionists should find this a challenging book to read.

Friedrich Nietzsche’s complex connection to Charles Darwin has been much explored, and both scholarly and popular opinions have tended to assume a convergence in their thinking. In this study, Dirk Johnson challenges that assumption and takes seriously Nietzsche’s own explicitly stated “anti-Darwinism.” He argues for the importance of Darwin for the development of Nietzsche’s philosophy, but he places emphasis on the antagonistic character of their relationship and suggests that Nietzsche’s mature critique against Darwin represents the key to understanding his broader (anti-)Darwinian position. He also offers an original reinterpretation of the Genealogy of Morals, a text long considered sympathetic to Darwinian naturalism, but which he argues should be taken as Nietzsche’s most sophisticated critique of both Darwin and his followers. His book will appeal to all who are interested in the philosophy of Nietzsche and its cultural context.

Introduction; Part I. Early Darwinism to the ‘Anti-Darwin’: 1. Towards the ‘Anti-Darwin’: Darwinian meditations in the middle period; 2. Overcoming the ‘Man’ in Man: Zarathustra’s Transvaluation of Darwinian categories; 3. Nietzsche Agonistes: a personal challenge to Darwin; Part II. Nietzsche’s Genealogy of Morals: 4. Nietzsche’s ‘Nature’; Or, whose playing field is it anyway?; 5. The birth of morality out of the spirit of the ‘Bad Conscience’; 6. Darwin’s ‘Science’: or, how to beat the shell game; Conclusion; Bibliography.