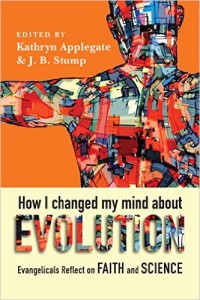 How I Changed My Mind About Evolution : Evangelicals Reflect on Faith and Science by Kathryn Applegate & J. B. Stump.

Summary: Perhaps no topic appears as potentially threatening to evangelicals as evolution. The very idea seems to exclude God from the creation the book of Genesis celebrates.

Yet many evangelicals have come to accept the conclusions of science while still holding to a vigorous belief in God and the Bible. How did they make this journey? How did they come to embrace both evolution and faith?

Here are stories from a community of people who love Jesus and honor the authority of the Bible, but who also agree with what science says about the cosmos, our planet and the life that so abundantly fills it.

Kathryn Applegate (PhD, The Scripps Research Institute) is program director at BioLogos, where she designs and coordinates programs aimed at translating scholarship on origins for the evangelical church. She earned bachelors degrees in biophysics and mathematics at Centenary College and a PhD in computational cell biology from The Scripps Research Institute (La Jolla). At Scripps she developed computer vision algorithms and mathematical models of the cell’s internal scaffold, the cytoskeleton. Kathryn enjoys an active involvement in both the science and faith community and in her church. She and her husband Brent have two young children and love exploring the state parks of Michigan together.

Jim Stump is Senior Editor at BioLogos. As such he oversees the development of new content and curates existing content for the website and print materials. He has a bachelors degree in Science Education (Bethel College, Indiana, 1991) and a masters degree (Northern Illinois University, 1995) and PhD (Boston University, 2000) in Philosophy. Jim was a philosophy professor and academic administrator for 17 years. Now he is the Senior Editor at BioLogos (biologos.org). He researches and writes in the areas of Christianity, Science, and their intersection. He also frequently speaks to various groups on these topics. Besides these scholarly pursuits, Jim spends time with his wife and three sons, plays guitar, runs marathons, and participates in a local CrossFit exercise club.