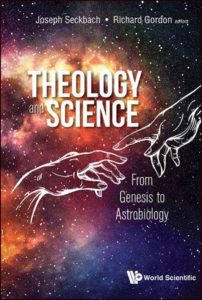 Theology and Science: From Genesis to Astrobiology

Summary:
The age-old debate between science and faith invites more players to the fore in this book. Proponents of the origin of life as a natural process and natural selection as a mechanism of evolution come face to face with advocates for the intervention of a creator, while other scholars believe that the gulf between science and religion should be bridged. At turns disconcerting, revelatory, and profound, readers are invited to leave their preconceived notions at the door and join these writers in this curious journey of discovery.

Table of Contents:
Preface by Joseph Seckbach
Prologue on Why by Richard Gordon
Part I Astrotheology
Chapter 1: Astrobiology as Contemporary Theology by Dawn Skjei Cooley
Chapter 2: Astrobiology and Astrotheology in Creative Mutual Interaction by Ted Peters
Part II Approach of Jewish Studies
Chapter 3: Science and Medicine in Talmudic Literature: Ancient Jewish Knowledge Compared to Modern Understanding by Mordechai Halperin
Chapter 4: The Science of One Life at a Time by Robert Pollack
Chapter 5: Science and Exegesis: A Case Study of Genesis 1 by Robert B. Sheldon
Part III Theology Critics
Chapter 6: On Language and Nationhood: Lessons from the Tower of Babel by Abraham Berkowitz
Chapter 7: Cosmic Conspiracy Theories: How Theologies Evade Science by Taner Edis
Chapter 8: Free Will: Science Reveals the Seat of Our Power to Choose by Gerald L. Schroeder
Chapter 9: Science versus Religion: The Fallacious Conflict by Frithjof A. S. Sterrenburg
Chapter 10: Scientific Thinking versus Religious Thinking from a Viewpoint of a Secular Science Educator by Shlomo Vinner
Part IV Interaction: Science — Theology
Chapter 11: Rabbi Kook’s Teachings on the Theory of Evolution: The Human Ethics by Dov Berger
Chapter 12: The Delusion of Unethical Science Popularization: Astrobiology in an Ethical Dialogue of Faith and Reason by Julian Chela-Flores
Chapter 13: From Matter to Emergence: Scientific and Theological Views on the Nature of Life by George V. Coyne
Chapter 14: Confluence of Biblical Truth and Scientific Facts Must Emerge for Wise Stewardship of God’s Creation by Robert Y. George
Chapter 15: Wonder and the Necessary Alliances of Science and Religion by Scott F. Gilbert
Chapter 16: Center to Circumference and Back: Theology and Science in Rabbi M. M. Schneerson by Meir Klein
Chapter 17: Big Bang Cosmology and Christian Theology by Joshua M. Moritz
Chapter 18: “Man-as-an-Animal Needs Religious Faith”: Rabbi Soloveitchik on Evolution and Divine Image in The Emergence of Ethical Man by Rachel S. A. Pear
Chapter 19: The Trouble with Thomists by Michael J. Behe
Epilogue on Why by Richard Gordon