Ed Kagin, mentioned later in this article (first printed in the June 27 Chicago Tribune) , was the original organizer of the Rally for Reason protest at the Answers in Genesis Creation Museum opening on Memorial Day, May 28, 2007. We say “original” because the left-wing Defending the Constitution organization (DefCon) made a sudden appearance at the last minute (dressed as carpetbaggers) and hijacked Kagin’s protest as their own. DefCon arrived with money, but little in the way of boots on the ground. In the days leading up to the protest, Kagin had boasted of thousands of atheists, freethinkers, humanists and even *GASP* a Christian attending the rally! (United Church of Christ Pastor Mendle Adams — long time opponent of God’s Word the Creation Museum.) Despite all the hype and $upport of DefCon, only about a hundred protestors showed up…

And, for those not familiar with the term “carpetbagger”, Wikipedia gives a nice definition:

“Carpetbaggers” was coined from the carpet bags used as inexpensive luggage. It was originally a derogatory term, suggesting an exploiter who does not plan to stay. Although the term is still an insult in common usage, in histories and reference works it is now used without derogatory intent. Since 1900 the term has also been used to describe outsiders attempting to gain political office or economic advantage, especially in areas (thematically or geographically) to which they previously had no connection. 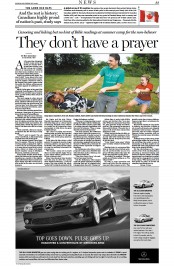 At the same time youngsters at Bible camps across the nation are reciting “Now I lay me down to sleep; I pray the Lord my soul to keep,” children at Camp Quest are climbing into their bunks confident there is no one out there to hear those prayers.

Proudly proclaiming the motto “Beyond Belief,” Camp Quest bills itself as America’s first sleep-away summer camp for atheists. Founded in 1996, it has inspired four similar camps across the nation for children whose parents are either opposed or indifferent to religion.

Much of what goes on here amid the cornfields of southwestern Ohio is little different from any other camp. Campers canoe, practise archery skills, and go on nature hikes.

They also engage in some unusual rainy-day discussions of philosophical issues. Children who barely come up to an adult’s waist toss around terms like “circular logic.” And those nature hikes focus on the beauty of evolution, unaided by any unseen hand.